on getting himself inaugurated

on dealing with problems

There is no response, just silence 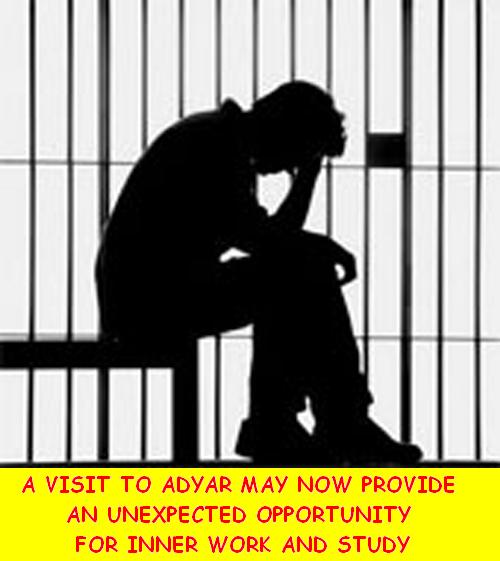 It is alleged by the former Adyar accountant Mr M Kannan that Adyar Estate General Manager and Theosophical Society official, Mr S Harihara Raghavan is claiming that he is so well connected with the local police that he can get anyone put in prison. It is also claimed that both Adyar staff and some Theosophical Society members resident at Adyar live in constant fear of him. According to the allegation, it is a wide threat that includes the word "anyone".

“Mr Harihara Raghavan is known to harass many

workers and others with police action by filing

police officer and can put anyone in prison”

It needs to be established firstly if Adyar Estate General Manager, Mr S Harihara Raghavan made this claim and secondly whether there is substance to his claim to be able to imprison people, and if so, how many times the threat has been carried out. He has made a complaint to the police resulting in the two day detention and interrogation of former Adyar accountant Mr M Kannan at Besant Nagar Police Station, so the threat does seem real.

In addition to the police detention, a letter from Mr S Harihara Raghavan to Mr Kannan regarding a car parked outside his quarters at Adyar makes a clear threat of police action, despite this being a civil and not a police matter, and the car not even belonging to Mr Kannan. I am also informed that the use of the phrase “things will be worse” in the letter, carries a much more menacing threat in Indian English than

Until the facts are established and the situation addressed, the threat of some sort of police action will have to be in the reckoning, not only of the Adyar staff and residents, but also all Theosophical Society members who visit Adyar. It may be prudent for members to stay away from Adyar, especially if they have a health problem that may be aggravated by police detention and interrogation. Mr Kannan suffers from a serious heart condition and has undergone surgery. It is to hoped that the international president has enquired as to Mr Kannan’s health and can report to members as to whether he is OK after his ordeal.

If Mr S Harihara Raghavan is as influential with the police as he is alleged to be, then there is unlikely to be any immediate help available for anyone detained by the police. General Council members may feel more threatened than the general membership and may suggest an alternative venue, in another country, for meetings. If there is a threat to the international president then the worldwide Theosophical Society will have to mobilise itself in support, or face disintegration.

It is reasonable and appropriate against this background to expect leadership to do a bit of leading. A clear statement from the international president to inform members that the matter is being investigated would at least assure members that the president is still in charge, and is working towards a resolution of the crisis. Silence by the president indicates that he is not in control.